The Siege of the Black Citadel: Copper Coins

THE SIEGE OF THE BLACK CITADEL

THE MAN FOR THE TASK

Slender and lithe, the girl spun in the firelight to the hypnotic beat of the drums. A trilling flute rose and fell with each twirl of her body. A necklace of long white feathers offered tantalizing glimpses of swaying breasts as she danced. Sky blue eyes flashed from beneath a mane of cornsilk hair plastered to her face by a sheen of sweat, her taunting gaze set off by a band of charcoal ash streaked across her face as a mask. Anklets of silver bells made their own music as her feet flew across the sand. 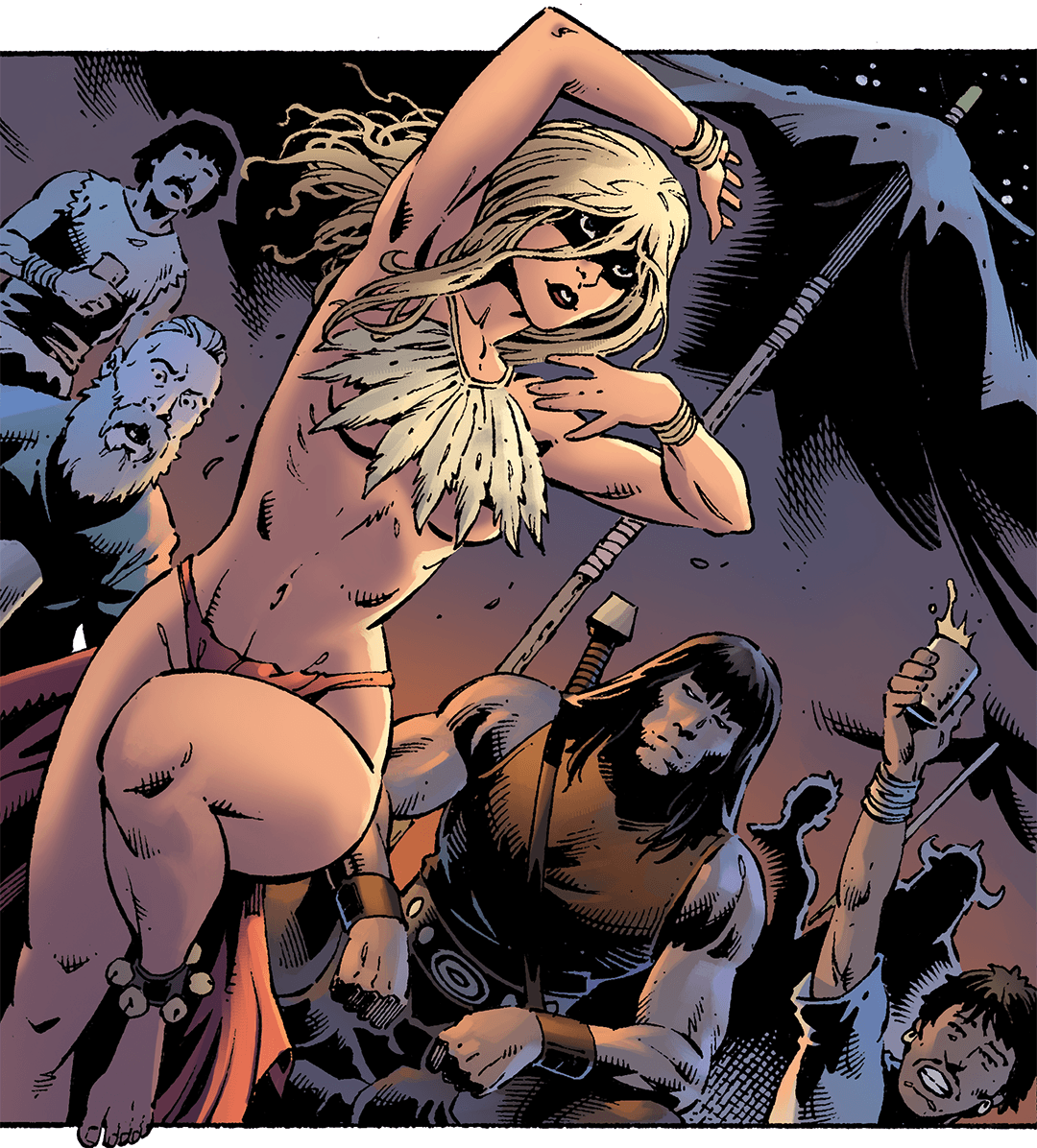 The air was thick with the scent of men and spices under the broad market tent that dominated the settlement of camp followers. Braziers offered meat, most probably horse, served piping hot on rods of oak. Barrels of ale and spirits, certainly watered down, were drained at a dear price that rose each day. There were women as well, and the cost to lie with them remained affordable. There was no scarcity of whores of all kinds in the rebel camp.

The men who crowded the rugs and tables that encircled the center ring of the tent paid the steep prices for food and drink with a grumble, yet they paid. The tedium of garrison life and the increasing cold of the coming winter forced them to find distractions within the souks and bordellos of the nomadic village of merchant tents that had come to rest beyond the log ramparts of the siege fort. The anticipation of battle to come—a battle many of them might not survive—made a man think more of the pleasures of the day than a full purse in a future he might not be alive to see.

“Cimmerian, I would speak to you,” Danix said, touching the broad shoulder of a man seated on the ground at the edge of the open ring.

“Conan cannot hear you, captain,” said M’ollo, a swarthy Turan with a braided topknot that reached the small of his back.

“Your words are drowned out by the tinkle of that harlot’s chimes,” laughed Lugan, a Nemedian with a thick brush of white blond hair and a puckered scar where his right eye had been.

“Damn you, I have work for you and your brigands.” Danix gripped Conan’s shoulder once more, fingers pressing deeper into the hard flesh.

Conan tossed the last of his copper coins at the feet of the dancing girl. She stooped to pick them up without interruption to the rhythm of her movements. She offered him a flash of white teeth as well as a brief sight of her womanly virtues as she bent to snatch at the sand for the talents strewn there. 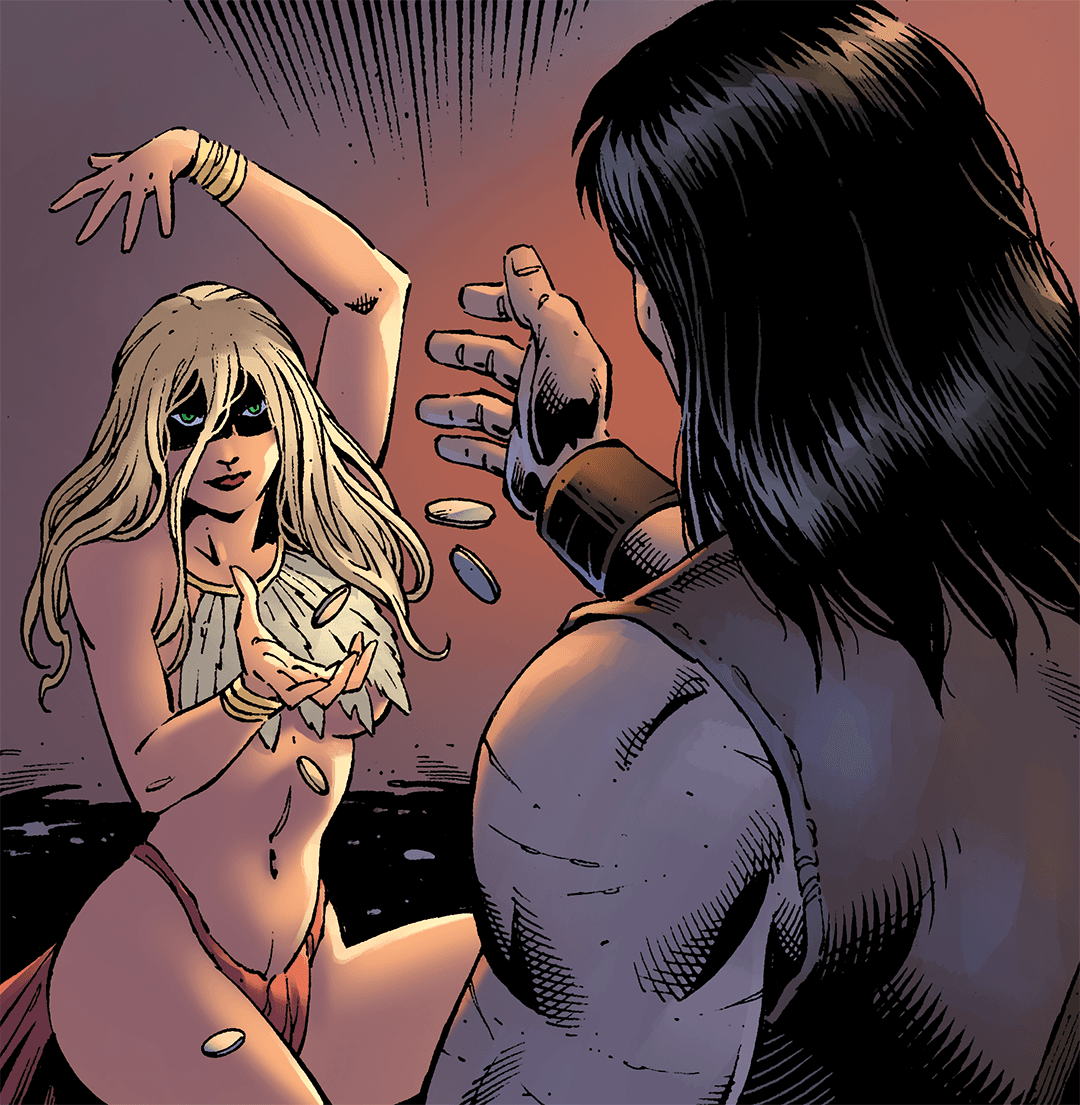 As though released from a spell, the Cimmerian turned his head to regard the red-bearded Vanirman as though for the first time.

“Danix?” he said, his voice a low rumble. “I am not on the rota for this night.”

Conan rose to his full height, fully a head taller than the Vanirman and half again as broad across the shoulders.

“I joined your company as a free man, Danix, by my own sworn oath” Conan said. “I will not be ordered about like one bonded.”

The shrill cry of a feminine voice caused both men to turn. The golden-haired dancer was slapping with both hands at a grinning Aesir who held her aloft enfolded in massive arms. The bells on her ankles rang with a frantic rhythm as she kicked her feet in the air. A vicious swipe from her long nails opened parallel wounds across the Aesir’s face. With a roar he hurled her flying so that she tumbled into the collection of drummers, bringing their cadence to an end with a crash.

The Aesir’s spine arched, drawn back by the Cimmerian’s fist tightly wound in his long, greasy locks. Conan drove a boot into the rear of the Aesir’s knee. All about winced at the wet pop of the warrior’s knee being forced out of joint. Conan dropped the big man to the sand and ended the Aesir’s shriek of pain and rage with a single blow to the face. The warrior sank to the ground where he lay unmoving, his nose a bloody smear of ruined flesh across his face. 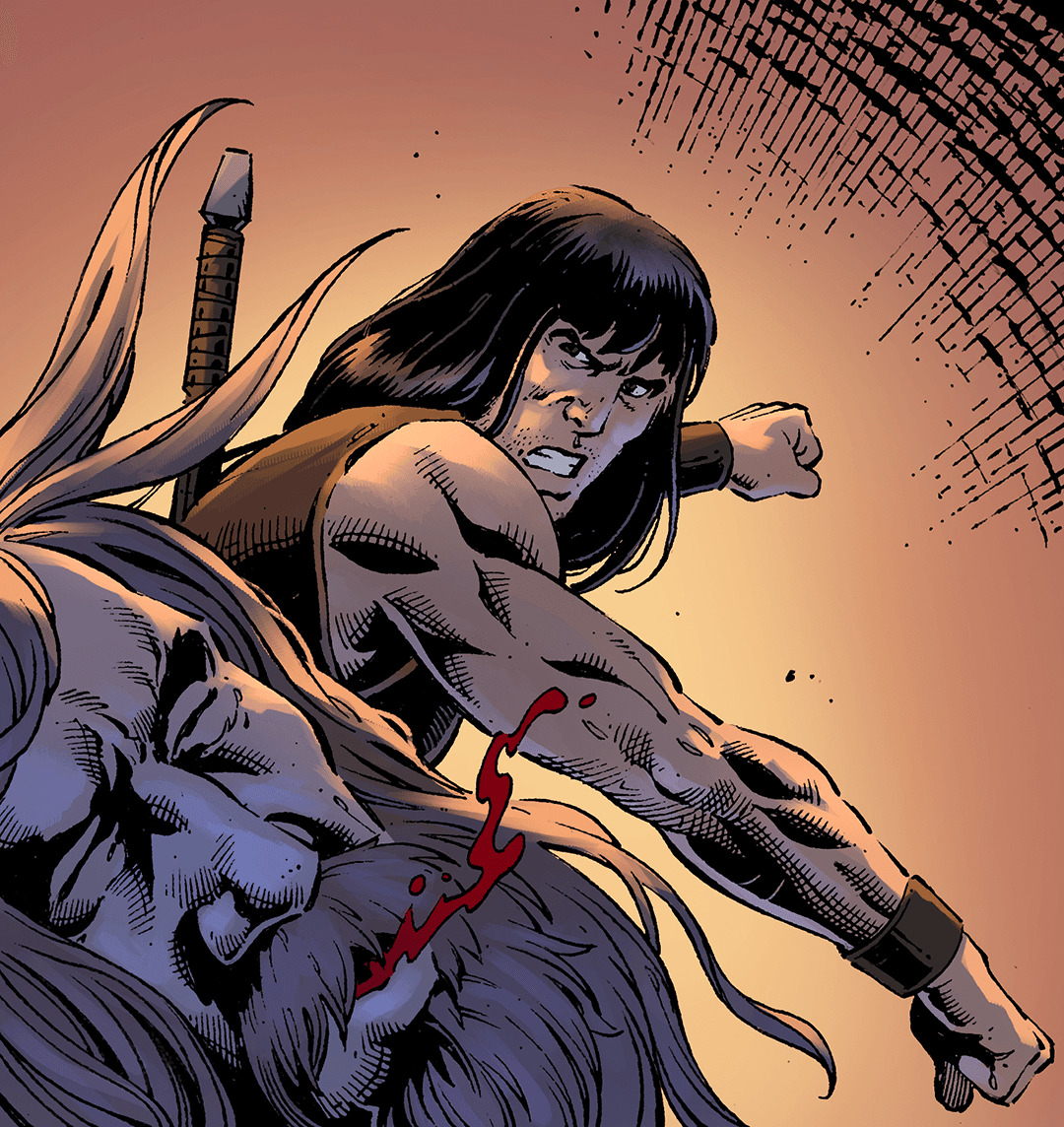 The girl rose to her feet from the mess of overturned drums to offer Conan a smoky look of gratitude and welcome. The Cimmerian stepped toward her, a hungry look fixed upon his features.

His progress was halted by Danix’ iron grip on his arm. Conan turned to him with a feral snarl.

“I need your guile as well as your sword arm,” Danix said, matching the Cimmerian’s cold gaze. “And when have I ever tasked you without reward or recompense?”

“Reward?” Conan narrowed his eyes as the Vanirman released his arm.

“A sack of silver coins. Enough to buy you that whore and twenty more besides.”

“And what must I do for this sack of silver coins?”

“Did you not tell me you were once a thief?”

“Once. In my youth to keep my belly full.” Conan’s expression darkened.

“I need those skills, my son. I need the wile of a thief to help me steal something of great value to our lord Prince Xathomidas.”

“And what is this thing I must steal?”

“Only the secret that will crack the walls of Talas K’rith,” Danix said, a grin cleaving his face to reveal black teeth. 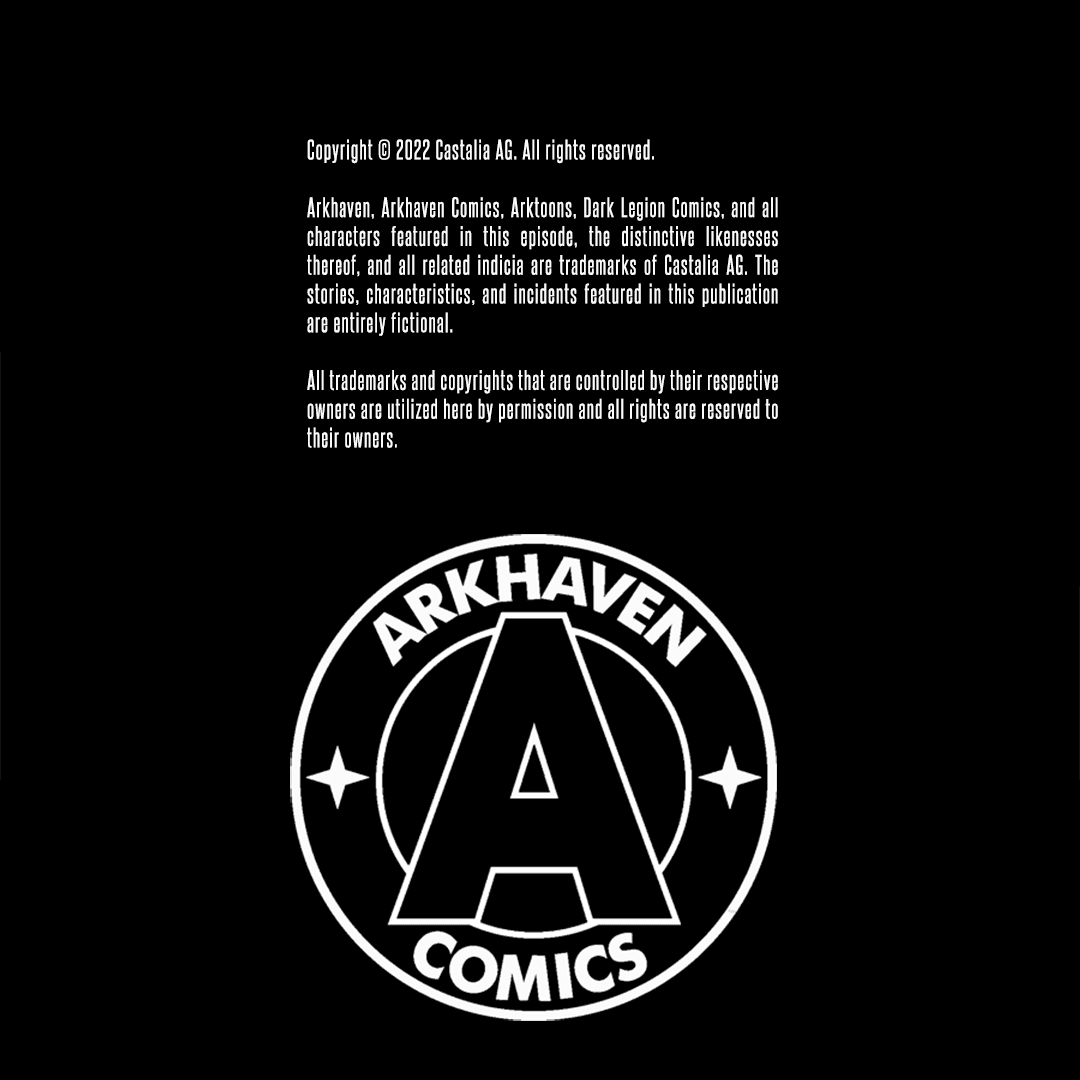 Want to comment on this episode?Subscribe now to support great comics!

No comments yet on "Copper Coins"

The Siege of the Black Citadel: Copper Coins